When we left Tampa, the temperature had been approximately 95 degrees farenheight with a feels like temp of 105. When we landed in Zurich at 7AM, it was 21 degrees with snow flurries the night before. Our plane had a tail wind of over 150 mph at some points and we arrived in Zurich an hour early. Because of the early arrival, we did not see a Globus Rep. at the arrivals but the documents had explicit instructions about transfer by hotel bus to the meeting point hotel. While waiting for the bus, a nice lady named Sonya stood nearby as she also looked for the hotel transfer bus. Upon seeing the Avalon bag tags, she introduced herself as the company rep. and accompanied us to the hotel. Avalon had a conference room rented for the Avalon Affinity passengers with coffee service which was very welcomed with our early arrival and the terrible airline coffee over France.

Sonya was very knowledgeable and only worked part time with Globus/Avalon doing meet and greet on the Weekends to assist the cruise director. We got some information about the train system and old Zurich was right near the station. She gave us multiple lunch ideas since things might be closed. The Moevenpick was right near the airport and the bus ran every fifteen minutes in the morning. We left our luggage with Avalon and took off with the daybags.

This is a good point to discuss luggage and Europe as I do in most of my blogs. Travel as light as possible as dress was pretty casual on the river cruise. I took mostly docker type pants and color jeans with cotton/polyester oxford cloth shirts. My wife travels with mostly slacks that coordinate with multiple tops and a couple of dresses for fancy evenings. I took a sport jacket for the river cruise and appreciated it many nights for the warmth if we went up on the top deck. Everything valuable is in the day bag or the money belt before we leave the hotel and everything heavy including tour brochures we read on the plane are stuffed into the suitcase. We will not see the suitcases again until six PM as they went off for a different daytrip than we were taking in the bowels of the early bus. We are able to travel with one suitcase each that is only 26.5 inches tall using our system.

We bought a 24 hour transportation ticket for about 8 Euros and we were in town in about 15 minutes. The tour rep had told us this would be valid for trains, busses and trams in Zurich. Everything was closed early Sunday morning, but it made a great environment to just walk around and see the sites until the light rain started falling. We had already walked most of old Zurich at that point, so we went off to the historical museum behind the station. This was a very diverse museum with the history of Switzerland plus various collections like tapestries, antiques, glasswear and some other interesting items. As there was a large welcome dinner at 6PM, we opted for an Italian store in the train station for lunch. We had a great Italian Pannini with a block of romano cheese.

Gina was running out of steam, but we had missed the Marc Chagall windows in the Fraumunster in Zurich. Marc Chagall is a famous stained glass guy that did window installations in various churches across Europe in the seventies. We had already seen his blue window installation in Reims a few years earlier in France. This one was multicolored with one red, one green, one blue and one yellow. We used our transportation daypass on the Tram up to the church and back as Gina was getting close to nap time. At the station, we had a little trouble finding the track that had the return train to the airport as it seems we could take a local line or one of the cross country lines and both stopped at the airport. Almost everybody in Switzerland spoke English and a train conductor actually took out his laptop to tell us you could wait here half an hour or go up to slot number 12 upstairs and get one in five minutes that is nonstop to the airport. In this region of Europe, people are very helpful and friendly to tourists even though they seemed stoic when going about their business. After the train, we picked up the hotel shuttle and took a quick one hour nap in a plush chair in the hotel lobby while we waited for the transfer busses to Basil.

We were out of Zurich quickly upon leaving the airport and drove through countryside to Basil. The countryside was very agricultural with cows, sheep and crops all along the way. We left Zurich in rolling hills, but the land flattened out as we drove along an interstate type highway. Basel seemed to be a more industrial type of river town with a lot of light industry and the boat was simply tied up at an industrial spot on the river.

Check in was friendly with champagne and a hot towel. Everybody was quickly shown to rooms. Since we arrived so early our luggage arrived about a half hour later when the busses came in from Mt. Pilatus. We had passed on the daytrip because it was cold and foggy, but some of the early arrivals took the cable car and cog railway up to the top of Mt. Pilatus to fill the time until we embark. We set sail as soon as everybody had arrived and there was a port talk each evening at 6:45 with dinner following at 7. We were soon at the welcome dinner where we had a good Prime Rib.

We met some very nice people on the boat. The river cruise clientele was a well traveled group and the open seating meant that you met different people each evening at tables of four, six and eight. Dinner each evening was a sit down a la carte affair with an appetizer, salad or soup, dinner and desert each time. On Avalon, wine is FREE with dinner. The boat had a lively one man band onboard that could play everything from Frank Sinatra to Santana and there was some type of one hour entertainment program nightly after dinner at 9PM.

The first evening, we were surprised around 10PM when we arrived at a large lock. We had not really thought about the logistics of river cruising, but the Rhine has over twenty locks that the boat passes through LINK. The lock operations were very interesting as the boat was lowered twenty to twenty five feet in some places (we went downstream). As we all stood on deck gaping at the large steel plate that got lifted above the water but it was dripping quite a bit of water when the staff all disappeared and we quickly laughed and retreated back inside as the water was about to drip on the top deck as we went underneath. At this stage in the river, all the furniture was taken off the top deck and all the canopies broken down so we could get underneath some of the lower bridges in this stretch of the river. The logistics of getting up and down the river and through the locks were very interesting as you were always passing something on the river, some town along the way or through locks. Much of the river cruising on this fast paced Rhine week is done at night with tours of villages, towns or attractions during the day. 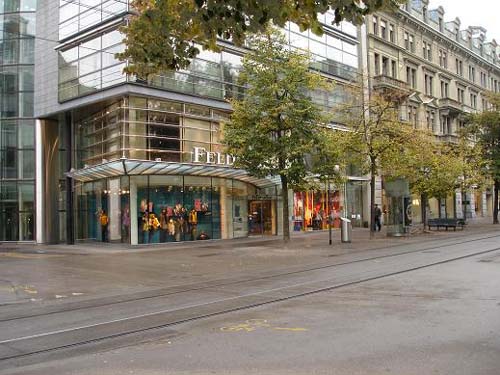 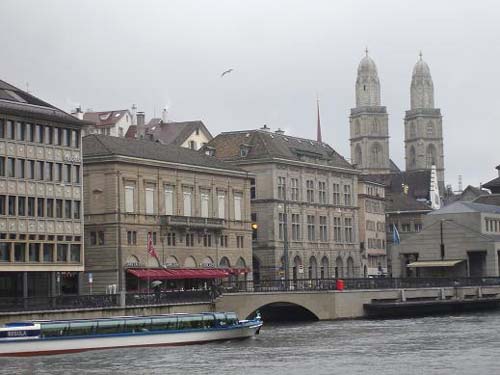 The rainy drizzle is still coming down as we arrive in the city. 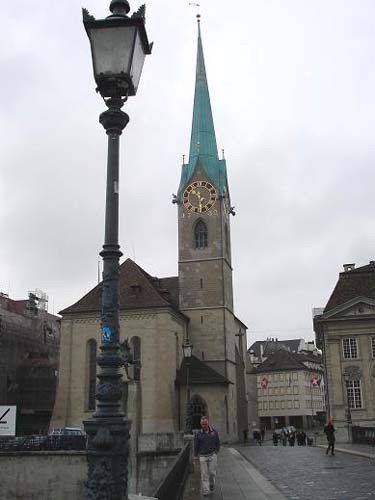 The Fraumunster Church in Zurich has a beautiful display of Marc Chagall windows but pictures were not allowed inside.

The Avalon representative suggested we buy a one day transport pass from the machine at the station for about 8e. This included trains into the city and also the innovative tram system running throughout the city. 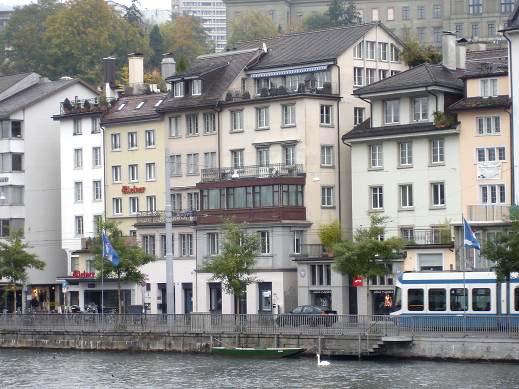 The buildings along the river in Zurich are beautiful. Mostly small craft and clothing shops. 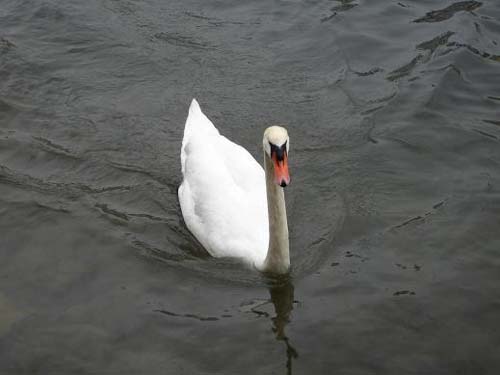 The swans were very friendly so we guessed the Swiss children must go down to the river to feed them from time to time. 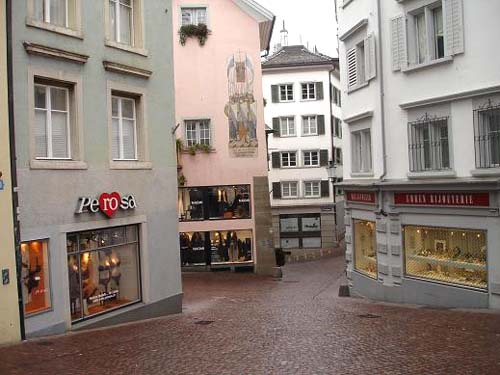 With the Euro at almost 1.5 to one US$ we were glad the trendy boutiques were closed as it was time for window shopping only. 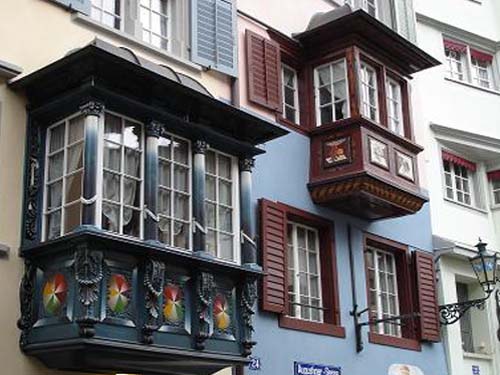 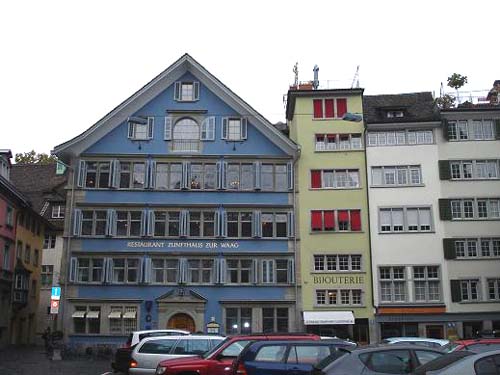 We were enjoying our free day in old town Zurich before the start of our Avalon River Cruise up the Rhine. 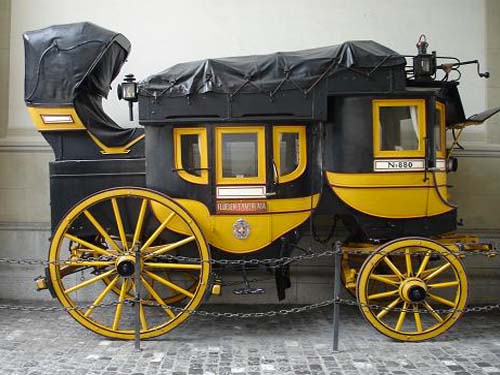 Our final stop of the morning was an attempt to get out of the cold rainy drizzle but we enjoyed the museum near the train station and they had the heat on to our delight. 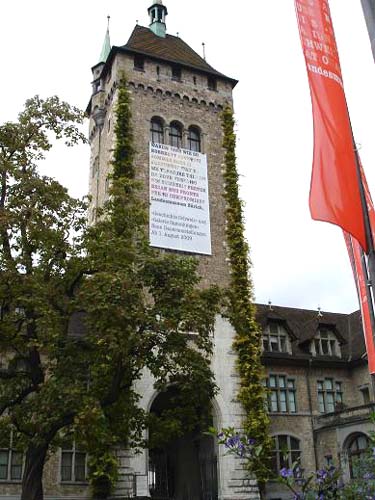 The Schweizerisches Landesmuseum was more interesting than we had expected from the description. It contained much of the history of Switzerland plus pottery, tapestries, carriages, ladies gowns plus some private collections that had been donated over time.