The next day we will be traveling through the famed Rhine Gorge for some daytime cruising. We are disappointed to see a cold, foggy morning when we rise for breakfast, but you cannot control the weather. It would have been nice to have the clear blue days that we had in Strasbourg and Heidelberg today. As always, Sapar has set up for breakfast and we are enjoying the full breakfasts that we skip at home. We are sailing up the Rhine for about 3.5 hours and our cruise director is upstairs in the bridge doing commentary until after the Lorelei.

The Avalon Affinity cruises past the famed Lorelei Rock in this stock photo courtesy of Avalon River Cruises.

In the beginning, we pass Rheinstein Castle which is the oldest on the Rhine. The guide explains that the castles were built originally to collect tolls from those passing by with goods on the river. This is our coldest day since Zurich so people are bundled from the wind but the sites are so beautiful nobody wants to miss a minute. People keep heading to the cabins to put on extra layers and we even see the blankets from the room brought up on deck. The pictures are beautiful even with the fog and we are all shooting at every turn of the river is framed by some type of fairytale castle.

As this is our first long stretch of daytime cruising, I am as fascinated by the types of ship traffic on the Rhine. We have been told this is the highway of Europe but we are seeing that today with flat river boats sailing past carrying everything from gasoline and natural gas to automobiles and coal. All of the boats have a crane on top and one or two automobiles from the crew. Many of the boats have little 10 or 12 ft. ferry boats also to cover all the contingencies of where they might park. Many of the captain’s bridges are cheerily decorated with plants and flowers including orchids plus they look like family affairs with playpens or mom and the kids up on deck playing.

We do not pass under any bridges on this part of the trip, but see ferries for river crossing at many points. Along the river at the beginning of the trip, we pass along white wine grapes and gingerbread towns. One brightly painted toll castle is even on an island in the middle of the river. As we work our way down the Gorge the river narrows and has some very dangerous turns. The boats seem to work together as they pass on both sides using a system of blue signs with blinking lights. The mate tells us that the ship coming up the river has the choice of passing right or left and we have to follow along as we are going downstream. Everybody is going a different speed so we pass some ships and some pass us along the way. This looks like very complicated seamanship to me as the river is not very deep or wide at this point but the ship traffic is very busy. To me the ships are as interesting as the Castles.

We pass the famed Lorelei rocks that legend says used to sing to the sailors at night to get them to crash on the rocks. There is also a statue now of Lorelei at this point too, but it is the big round rock that is actually the Lorelei at the sharp hairpin turn of the river. After the Lorelei, the crowd on deck dimishes quite a bit. It is about 11AM and lunch is not served until 12:30, so John scoots down to pick up a bottle of Sect that we stashed in the mini-bar. With the champagne like wine, we are fortified from the cold and are enjoying the top end of the Rhine Gorge almost alone on the top of the ship.

The day before we left Florida in October was still about 95 degrees so we are enjoying the cold day even though Gina has her gloves on. Our companions on the ship are joking that the Floridians are still on deck the longest of anyone but we are thoroughly enjoying the daytime cruising. The towns we are passing are very pretty and they all look like they do day business from the daytime river cruise boats that pass through the Gorge. As we get to the bottom of the Rhine Gorge, we are nearing Koblenz and start to see more suburbs rather than gingerbread towns but the sites are still pretty even though the topography is flattening out.

Lunch is a hearty offering of German stuffed beef rolls with mashed potatoes and red pepper on top. Each day there has been a great soup and today it is lentils with sausage on top. By the time we finish lunch, we are docking on the Moselle side of Koblenz and the cruise director is announcing the plans for the walking tour in the afternoon. We are told if you come back to the dock and the boat appears gone, you are probably on the Rhine side of town rather than the Moselle side of town. 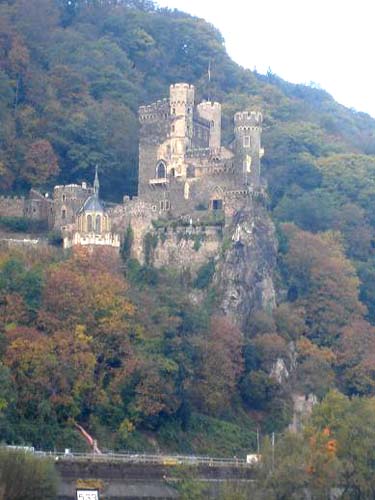 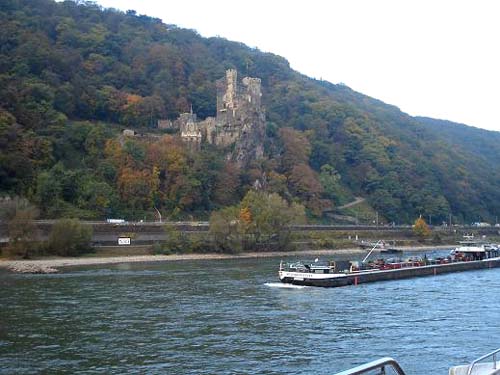 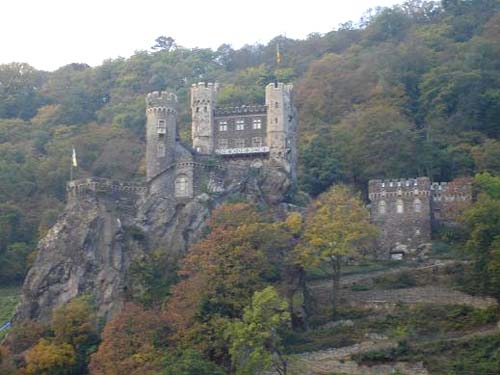 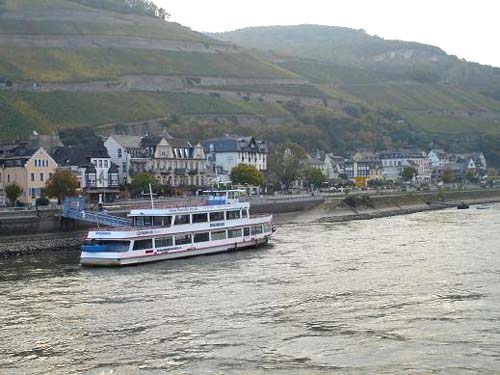 Day cruising boats are plentiful along this stretch of the river. 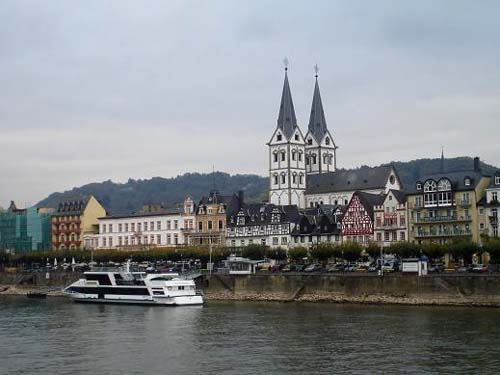 Some of the less touristy towns are visited by the day boats. 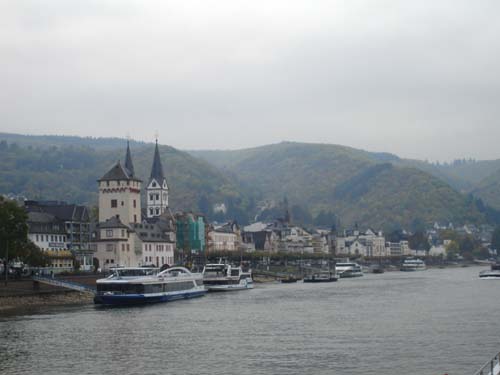 Another small town with day boats in the Rhine River Gorge. 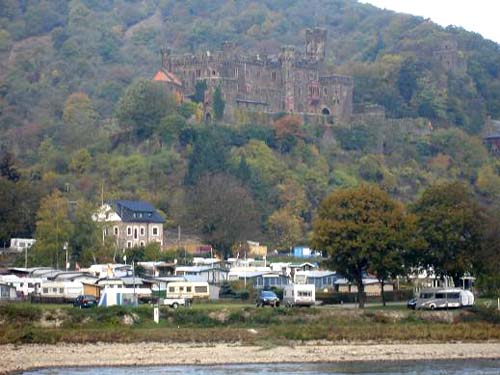 Somehow the trailer park and the castle did not seem to belong in the same picture. Some European tourists travel with smaller campers and the Rhine is a popular fall destination. 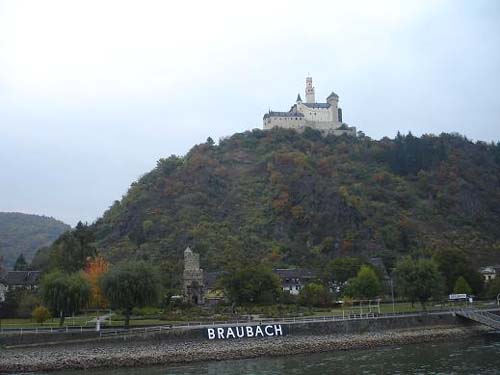 The castles on top of the hills guard each turn in the river.

The long view and the close up view is different as you move down the river. 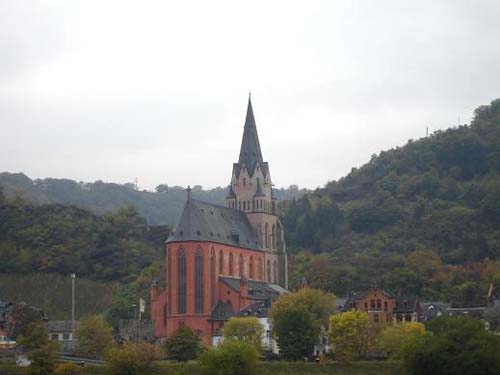 Some castles are being used as attractions to visit, some still homes and some being turned into hotels. 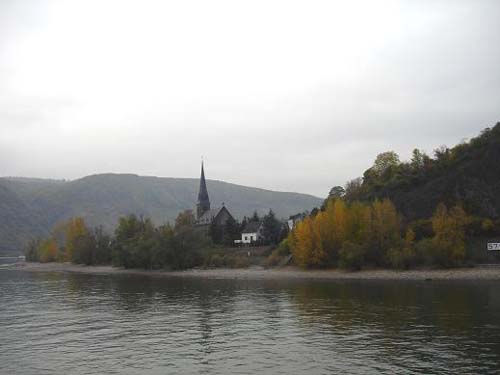 Even on a dreary day, the fall foilage and a church make for a pretty picture. 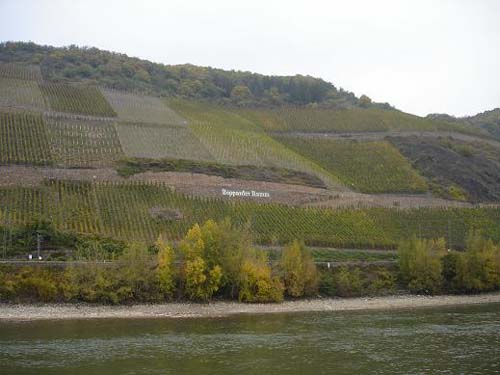 Reiseling grapes are grown along the banks for about an hour north of Rudesheim. 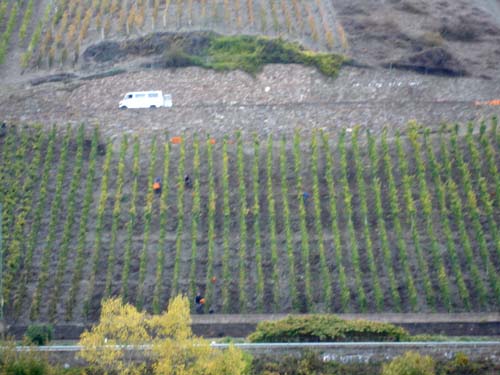 Look closely and you can see the workers in the field picking white wine grapes. 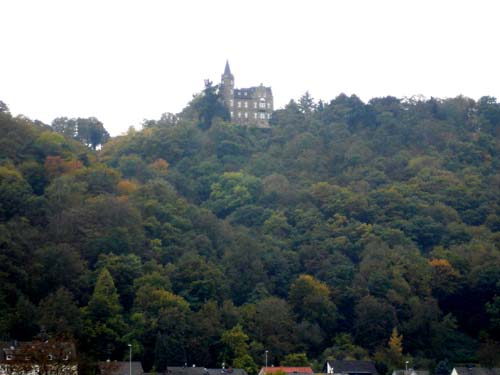 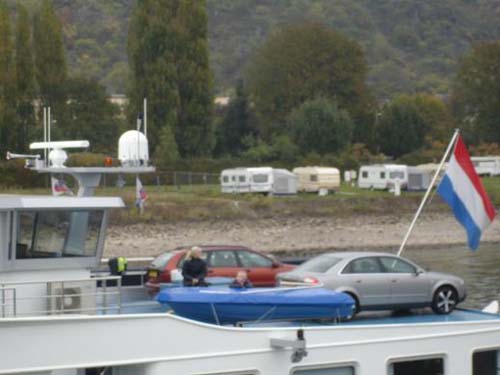 Cars and boats on the passing ships. Mom is playing with a Jr. Captain in the boat. 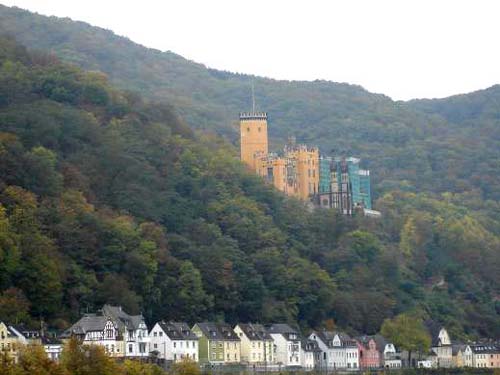 This castle is being turned into a hotel by a Japanese company. 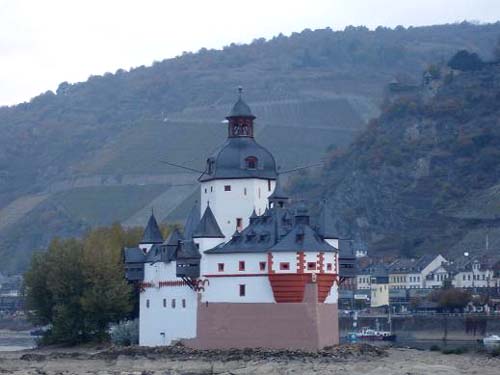 This castle is built right in the middle of the river on an island. It made it easier to collect tolls. 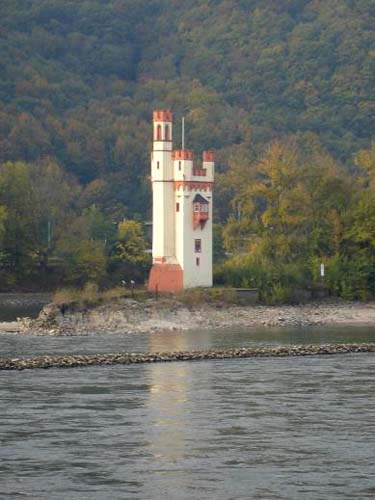 Another cute little toll castle along the banks. 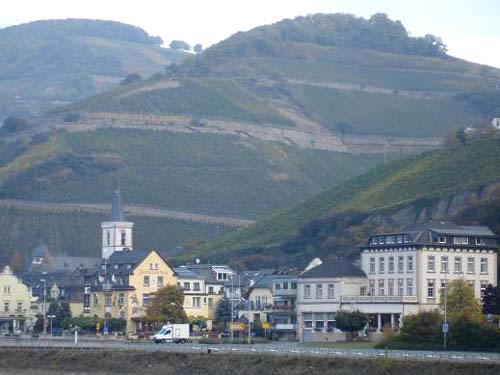 A small town with grape fields in the background just north of Rudesheim. 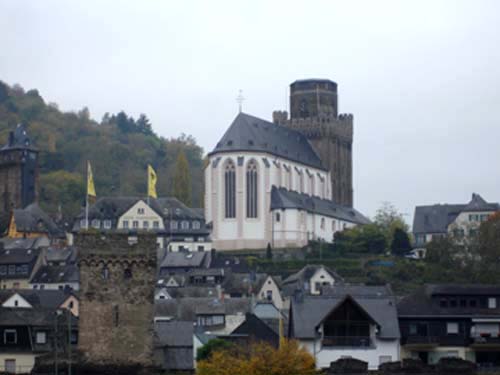 A large church in a town along the Rhine River Cruise. 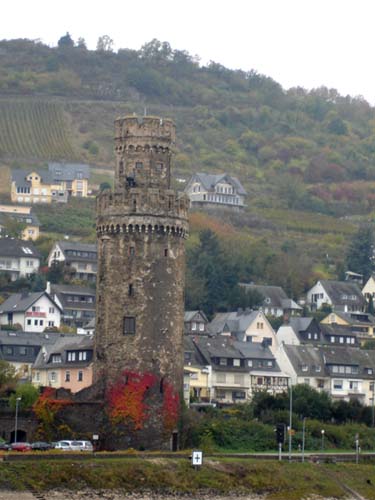 Fortifications to protect a wealthier town along the river. 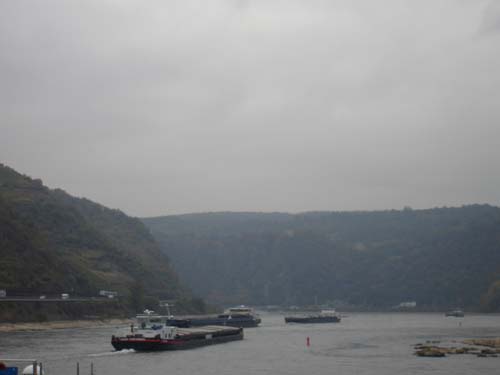 Lots of traffic on this river as well as castles! 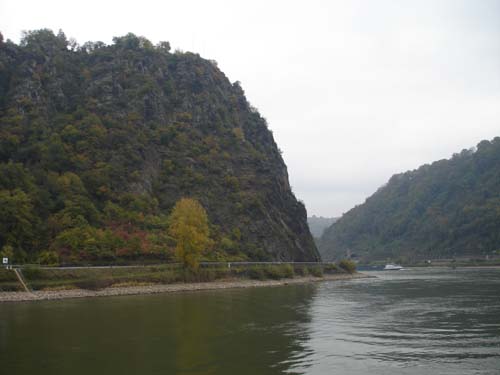 The famed Lorelei Rock as seen from our Avalon River Cruise boat. 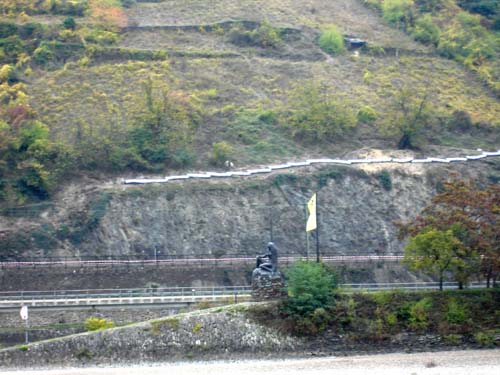 The statue of the Lorelei, just past the point. The actual rock is the Lorelei but the statue is the focal point of many tourist's pictures. 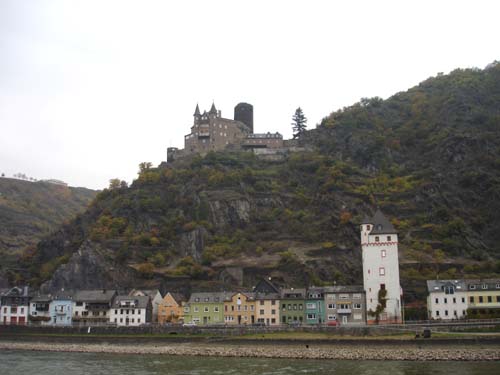 There was a never ending string of picturesque towns with castles on the hill. 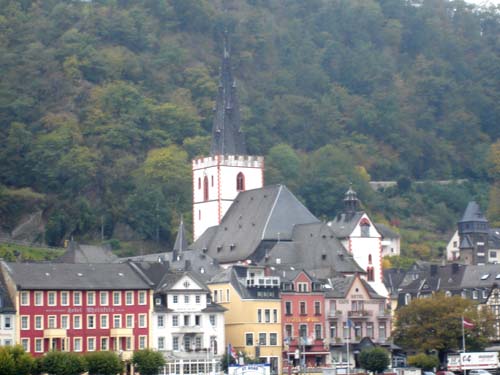 All of the towns were bright and cheery and seemed to do business with the river cruise boats.

Containers on ships and castles made for an interesting ride. 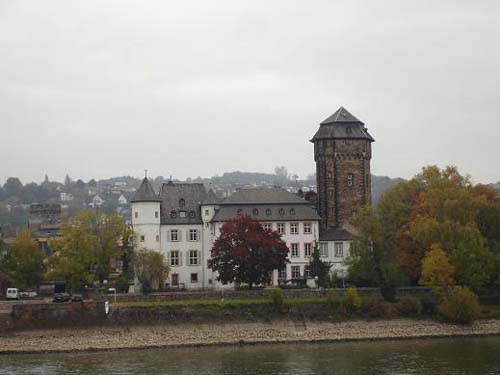